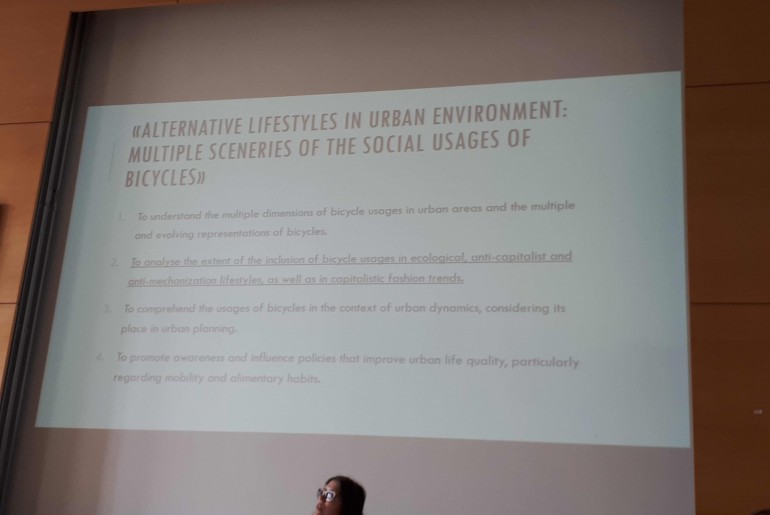 Vera Lúcia Alves Pereira Diogo presented the paper titled Alternative Lifestyles in Urban Environment: An Insight into Sharing Economy from the Social Usages of Bicycles, included in the Sociology Perspective/Social Psychology Perspective I Parallel Session III1 at the 5th International Workshop on the Sharing Economy, in Mannheim on 28-29 June 2018.

An excerpt from Vera's report:

"During my presentation, it was quite insightfull to see how people who live in countries where the use of bicycles is instutionalised (most of the participants) react to the findings of our research undertaken in Porto, Portugal, where it is still at the point of starting to be accepted.
I found that this workshop gave everyone a chance to participate and share their ideas on the sharing economy, as every session had enough time for debate. In addition, during the closing session the organisers passed on a small questionnaire regarding people´s perception of the following items related to the sharing economy: stable concepts, areas of knowledge that need refinement, and areas in which exploration is still needed for little is known. The results of these questionnaries where gathered by two of the organisers as the session went on, and in the end shared with the collective. Most people seemed to be moving away from conceptual definitions of the sharing economy, hence they considered it sufficiently defined, instead participants were focusing on refining means to measure its impacts, as well as on exploring aspects such as the legal frameworks for sharing economy organisations."

Vera's participation was supported by a Sharing and Caring ITC grant.